Archive for the tag “Scottish Power”

A Nation of Sheep

The energy Regulator Ofgem has called on the suppliers to reduce their charges to customers following recent lower costs. Unsurprisingly they have refused. All of them are using similar arguments about uncertainty and ‘other costs’ in an attempt to justify making an average extra profit this year from each customer of £60 per year, compared with the last three years. It sounds very much to me like an energy cartel.

This is what happens when government privatises what is a natural public resource. The companies obviously work together (if proven it would be illegal) to keep profits for shareholders up and customers become a poor second and with competition a myth. The old Water Boards were also sold off, water for Christ’s sake, the essential for life, sold off for profit. British Rail which wasn’t a bad service at all, sold off for profit. If BR had the same public funds put into it as the private companies receive now from the State, it would be better and more importantly perhaps, cheaper to use.

The gullible people just sat back and let it all happen, some tempted by the carrot of cheap share offers that soon ended up in the hands of the big investors. Still they sit on their hands while chunks of our health and education are handed over for profit. 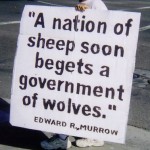